Today the first choice in treating prolactinoma patients are prescription medications, i.e. the so called dopamine agonist drugs (bromocritpine, cabergoline, lisoride etc.), and if the medication treatment proves to be unsuccessful, surgery and/or radiotherapy by Gamma knife are recommended to patients. Since the growth of pituitary tumor is caused by the changes that occur at the molecular level, the treatment of such tumors will increasingly rely in the future on medications, while ingredients of such medications will probably come from plants. Aware of the potential that is hidden in plants, the authors of the texts on this website and the founders of Dren Company  have created as a result of their long term investigations a herbal remedy that has proved to be very successful in the treatment of pituitary adenoma, especially in the treatment of macroprolactinoma. By this the authors have demonstrated for the first time that the patients with certain pituitary tumors can be cured by herbal pharmacotherapy. Please note that the herbal remedies for pituitary adenoma by Dren Company can be obtained at the moment only from their producer in Žepče, Bosnia and Herzegovina. We send them by mail and you can get all the necessary information via e-mail. Before introducing phytotherapy in the treatment of pituitary adenoma it is necessary for us to become well acquainted with the nature of the disease and to be able to interpret correctly the medical findings we receive from you.

In the period from 2005 to 2010 a research has been done on the effects of herbal remedies in the treatment of macroprolactinoma patients. The results of this research were published in Afr J Tradit Complement Altern Med. Two papers were published on this subject and here you can read their abstracts:

The first paper discusses the effects of our herbal remedies on prolactin levels in macroprolactinoma patients while the second one discusses the effects of phytotherapy on reducing the tumor size. The results presented in these papers undeniably show that our herbal remedies definitely deserve a place in the treatment of macroprolactinoma, but what is more, they often seem to be the first choice in the treatment of most prolactinoma patients.
In the following text we will present the results of the above mentioned research to the readers. The following key indicators were considered in the course of the research: prolactin levels, tumor size, visual condition, the duration of previous treatment with dopamine agonist drugs, the number of patients who underwent surgical procedure, gender and age representation of patients. 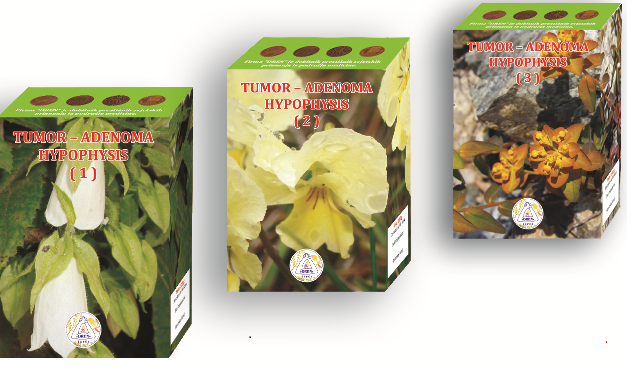 Before commencing the phytotherapy all patients had to enclose their medical documentation which gave us insight into their medical condition. This information was compared later with the results obtained from medical investigations performed in patients after their treatment with phytotherapy. All patients have been treated with three herbal varieties which should be taken at regular time intervals, each preparation once daily. These herbal preparations are prepared and drunk as tea, by dissolving 1.3 g of herbal mixture in 200cm3 of boiling water. All three preparations consist solely of powdered herbs and do not contain any additional substances.

During the preparations for this research we have taken into account that we must abide by ethical norms which prescribe that patients should not be denied the best treatment available in modern medicine during research. For this reason the patients who before the start of phytotherapy had been prescribed dopamine agonist drugs such as bromocriptine or dostinex by their doctors continued to take these medications in the same dosage together with phytotherapy  and only the patients who before the start of phytotherapy have had to give up the treatment with prescription drugs due to serious side effects were treated by phytotherapy alone.

The results of phytotherapy in the treatment of macroprolactinoma

All patients who applied for phytotherapy have had previously unsatisfactory results with prescription drugs treatment, which adds additional value to the results achieved during research. Beside receiving medication treatment, 15 of our patients had undergone one or more surgical procedures before commencing phytotherapy in an attempt to remove the tumor, however in none of these cases had the tumor been completely removed, and with time, a new macroprolactinoma was formed from residual tumor tissue.

After performing statistical analysis of the results obtained from the research, it was evident that the best results of using herbal remedies have been achieved in patients who were treated by phytotherapy alone which opens the possibility for phytotherapy to be the first choice therapy, at least for some of the patients. Subsequent data analysis has shown that the results of phytotherapy appear to be less satisfactory in proportion to the length of the previous treatment of patients with dopamine agonist drugs. Thus the poorest results have been achieved in patients who before the start of phytotherapy had been on dopamine agonist therapy longer than 3 years. In most of the patients serum prolactin levels dropped and the tumor size was reduced while several patients completely recovered from the tumor. The reduction of tumor size as a result of phytotherapy is especially important in view of the fact that this led to its regression from the cavernous sinus region which opens the possibility for performing a more successful surgical procedure. It has been noted that once the tumor mass has invaded the cavernous sinus region, this excludes the possibility for its complete surgical removal.

Pituitary macroadenomas, including macroprolactinoma, can seriously jeopardize the patients health by its growth and invasion of surrounding tissues. One of the most common manifestations of tumor growth are visual field defects due to tumor compression of the optic nerve and optic chiasm. The results can be different degrees of visual damage. If the tumor regresses or is reduced, optical tissues are free of compression by tumor and patients vision returns back to normal. In 60 per cent of our patients the visual condition improved after phytotherapy. In the remaining 40 per cent of patients the visual field impairment remained, however, it should be noted that in one group of these patients a permanent visual impairment had been previously diagnosed and as a result significant improvements in their vision could not have reasonably been expected. Permanent visual impairment occurs if optical tissues have been exposed to tumor compression for a longer period of time or their impairment occurred as a result of surgery, which occurs in 15-20 per cent of patients who underwent surgery.

It is important to note that none of the patients who were receiving phytotherapy (duration: 3-41 months) reported any side effects and the best results were achieved in patients who were treated with phytotherapy for approximately 12 months. On the other hand, according to recent recommendations of the European Medicines Agency maximum dosage of bromocriptine should not exceed 30 miligrams due to the potential heart risks of the drug, while maximum dosage for cabergoline – dostinex is limited to 3 miligrams per day. Good illustration of the safety of these herbal preparations for health are two patients who got pregnant during phytotherapy as a result of normalization of their prolactin levels. Both were in the group of patients who were receiving simultaneously prescription medication treatment and phytotherapy. After they got pregnant, they decided for themselves to stop taking prescription drug treatment and continued to use phytotherapy alone. It is very important to proceed with phytotherapy during pregnancy because during pregnancy there is an increase in the level of estrogen hormones which stimulates the growth of prolactinoma which can lead to new tumor growth and seriously jeopardize pregnancy. Both patients eventually carried their pregnancy to full term without any problems and delivered two completely healthy babies.

With herbal remedies by Dren Company the best results can be achieved in treating macroprolactinoma. The results we have so far have shown that these herbal remedies can be effective in the treatment of microprolactinoma as well, especially of microprolactinoma that are more than 5 mm in diameter, and with prolactin levels three or more times the upper limit of the reference range. We do not have sufficient experience with using herbal remedies in the treatment of somatropinoma (acromegaly) and corticotropinoma (Cushing’s disease), although there are encouraging first results, while we never had any experience so far with gonadotropinomas and tireotropinomas.